All day Wednesday September 5, the Kindle version of the book "The Girl Who Had No Enemies: and the Man Who Hated Women", by Dennis Fleming will be available for free at Amazon.com.
Posted by Dennis Fleming at 5:07 PM No comments: 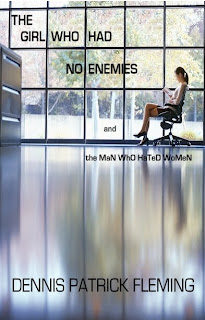 Just published my new book The Girl Who Had No Enemies: and the MaN WhO HaTeD WoMeN Available at Amazon.com new for $8.43. It is a rewrite of the previous edition titled, She Had No Enemies, and focuses on areas of interest that the first edition missed. The Girl Who Had No Enemies looks at serial killer LaRette's mental health and describes other murders that he committed. It also covers the heroic efforts of Florida deputy Pat Juhl and her six-year interrogation in which she was able to document the killer's admission to over two dozen additional murders. Anthony J. LaRette Jr., had been on a ten-year-long path of violence, murder, and rape. Eighteen-year-old Mickey Fleming had recently graduated high school and had stayed home from her summer job to nurse a migraine headache and a fractured collarbone. THE GIRL WHO HAD NO ENEMIES follows the parallel trajectories of these polar opposites until they meet and then chronicles the emotional damage and rebirth in the aftermath.
Posted by Dennis Fleming at 5:19 PM No comments:

One Hour Radio Interview About My Book "She Had No Enemies"

One hour interview with Tony Kay at Artist First Radio.
Posted by Dennis Fleming at 9:56 PM No comments:

This radio interview also involves Missouri Murder Victims' Families for Healing MMVFH
Posted by Dennis Fleming at 11:16 AM No comments:

Press Release for "She Had No Enemies"

Click here for radio interview I did today. Visit the website for Missouri Murder Victims' Families for Healing.
Posted by Dennis Fleming at 7:02 PM No comments:

My Book is Published 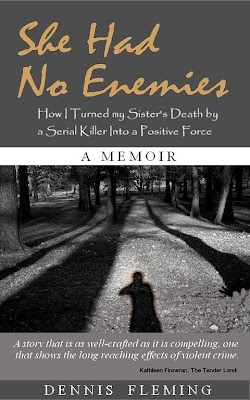 My memoir She Had No Enemies is available at Amazon.com and Target.com and is getting great reviews.

My youngest sister, Mickey, has been eighteen for more than twenty-five years now. That’s how old she was in the summer of 1980—when he murdered her. Anthony J. LaRette, Jr. was from out of town. We’d find out later, much later, that he was also a serial killer.


I can be reached by email dennyvision@charter.net

This is an intensely personal story about the murder of my youngest sister on a perfect summer morning in the peaceful town of , . It is a story filled with sadness, anger, and even humor about my attempts to cope with the greatest tragedy I’d ever known.

She Had No Enemies is a life-affirming story about my twenty-five-year search for meaning and fulfillment in the face of a devastating situation. From the shocking details of Mickey’s murder and my subsequent suicide attempt to the mixed feelings I experienced as I witnessed LaRette’s execution, I delve deeply into the complex process of coming to grips with Mickey’s death—and of eventually finding forgiveness in my heart for her killer. Furthermore, I struggle with serial killers and explore our responsibility to prevent the assault on women and protect our children.

The following resources may prove helpful to family members of murder victims and to death penalty abolitionists.

ORGANIZATIONS FOR ABOLITION OF THE DEATH PENALTY

Religious Organizing Against the Death Penalty

New Yorkers Against the Death Penalty

RESOURCES FOR FAMILIES OF MURDER VICTIMS

for Victims of Crime

Office for Victims of Crime

Posted by Dennis Fleming at 7:26 AM 2 comments:

Dennis Fleming
As Andy Ashling, I'm writing a memoir titled: "The Sex Life of Andy Ashling". It is not pornography or erotica. It's a comedy, maybe a surreal one, but basically a comedy.